Just a quick note to you this month to let you know that something you have been asking for is now available. The new 968 Register window decals have been produced and are now in stock. These are the “cling” style decals similar to your PCA sticker. They are approximately 3” tall and you can see one installed in the photo of my coupe below. They feature the register design created by our webmaster Adam Blauer and look great. This first batch was produced with the yellow 968 featured. I had to front the cost for these decals so I’m looking for a donation to help recuperate my costs. If you would like a cling I would request a donation of two dollars to cover the cost of your first one including postage. Each additional cling per order would be $1.50. Payment can be made using cash, check (made out to me), paypal (jeff968), or I plan to be at Hershey on Saturday April 22nd so I can bring one for you for personal delivery. Just let me know. 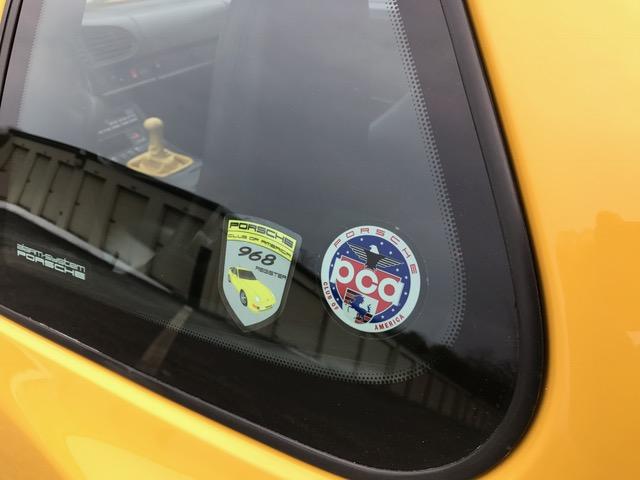 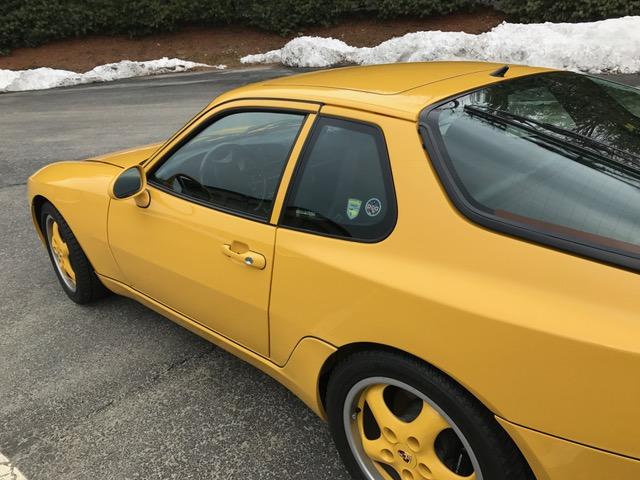 So show your pride with your 968 and being part of the PCA 968 register by sporting one of our window clings! 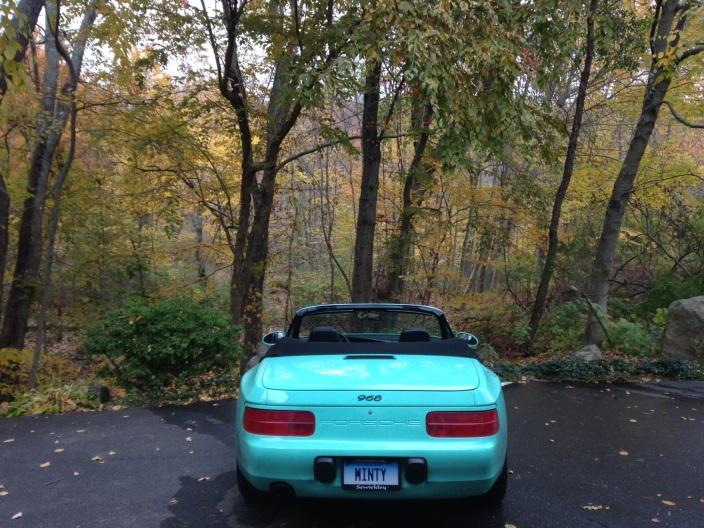 I have been working on cars for 40 years now and truly enjoy the pastime. I really feel a bond with my vehicles when I actually work on their related maintenance. Over that time period one of the more exciting experiences I have enjoyed was the installation of a new engine. Much work and money had gone into getting to that point. And when that new engine fired up for the first time it was certainly a sweet feeling knowing that all that time and money had resulted in this pivotal moment. However, hearing the engine fire up was expected as everything had been addressed. It was sitting there looking brand new and I expected it to start up and sure enough, it did. I’ve done about a half dozen new engine install and fire-ups over the years and they always went as expected. That said, I had never had the experience of bringing an engine back from the dead, until this past January, and boy was that exciting in a different way. 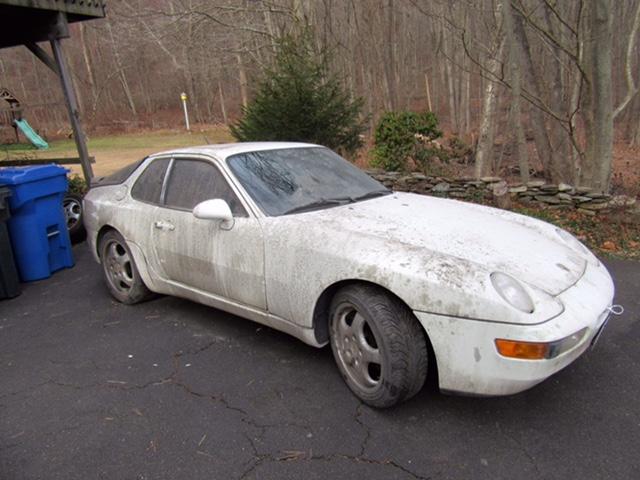 You may recall that a few months back I picked up a new project. The “matador” is a super rare 1992 968 coupe with a full leather interior in matador red. One of just two produced, it is my intention to restore this car and bring it back to its former glory. She was in tough shape when she arrived from Colorado on the last day of 2016 but there was tons of potential there. Despite the cold New England temperatures I went right to work. One of my first goals was to get her running. Although I have had these new engine experiences over the years I had never brought a car “back from the dead”, meaning getting it running from a long dormant state. It had been at least 6 years since she last ran and the car had been totally neglected. I started by draining the old gas and replacing it with new fuel and a bottle of injector cleaner. I checked the oil and belts which looked good. Then I pulled the battery out of one of my other 968s and hooked her up. With a turn of the ignition key I was rewarded with the site of dash lights and a warning chime! Great first signs of life. There was no smoke from some unknown electrical gremlin so I proceeded forward and turned the key. The car turned over but that was it, no start. It sounded like I was getting good compression so the next thing to check out were those two essential ingredients, spark and fuel.

I pulled a plug wire and had my wife turn the car over and saw a nice healthy spark. Another good sign but we still weren’t running yet. I then opened up a fuel line and confirmed my problem. No fuel. But why? That is the question. So, I went first to one of the 968 model’s nemesis, the fuel pump DME relay. I replaced it and tried again. Still no fuel. Next up was to check the fuel pump. I got under the car and ran a couple of battery leads to the fuel pump and all it would do was click. I was on to something here. Fuel pumps are supposed to hum, not click. Sounds like the pump is frozen. So, I ordered up a new fuel pump which showed up a week or so later. 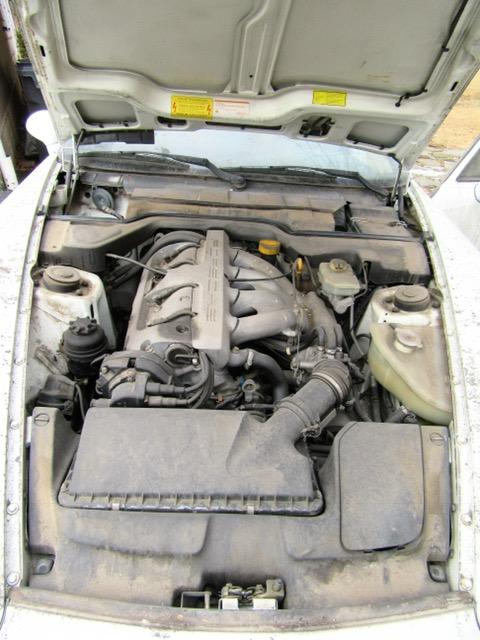 I waited until a warmer-then-usual Saturday in January to do my install which went as planned and included a new fuel filter. Then it was time for the next try. Would the car fire up to life or would I find that there was just another problem? Everything was back together so I turned the key and the car turned over. Still nothing. Could it be that DME relay? I was really hoping the fuel pump would do it. I swapped the relay and hit the key again. She continued to turn over and then it happened! The Matador coughed!!!! Just once at first but I heard it. A definite cough. My eyes bulged as I processed what I just heard. I looked to my son Greg to confirm I wasn’t hearing things and he had the same look on his face. The engine continued to turn over and then it happened again, another cough, and then another and I could hear the Matador trying to come back to live. The battery was strong, the fuel fresh and potent. Come on! Come on! More coughs and then suddenly the engine began to run, very roughly at first but it was running!! Amazing! I could hear the car coming back to life. The semblance of running continued and with each passing second it became smoother and more powerful. I wondered if acorns were shooting out the exhaust like I had seen on a TV show documenting a similar event. As a full minute went by the car continued to run better as I applied a light throttle. Just enough to stay running but not too much. She had been sleeping for such a long time. After a few minutes I started to pull my foot from

the gas pedal and was happy to hear that the Matador could now hold an idle. With each passing minute the car smoothed out and sounded stronger and stronger. After a few minutes the coolant came up to temperature and I had heat. The Matador had indeed come back to life!

The days that followed this amazing event were spent addressing smaller issues like hoses leaking coolant but every time I went to start the car it started right up and ran strong. To me, this experience was also a testament to the 968’s fantastic Bosch fuel injection system that can come back after such a long slumber with just a few general maintenance steps. Getting the car running was an exciting experience and one I will always remember. Next up, I need to replace that wrecked quarter panel! Stay tuned. 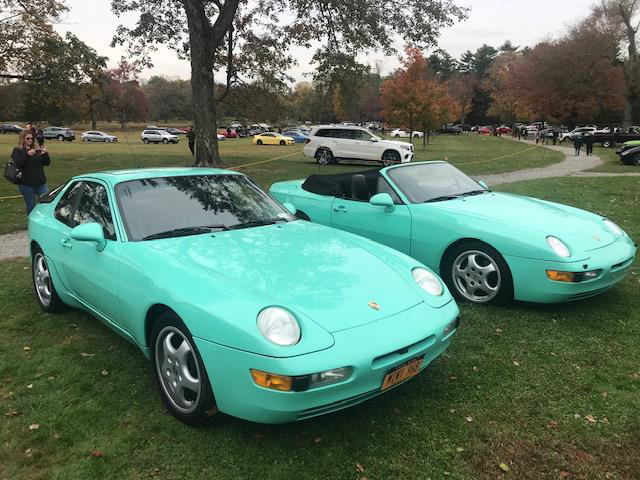 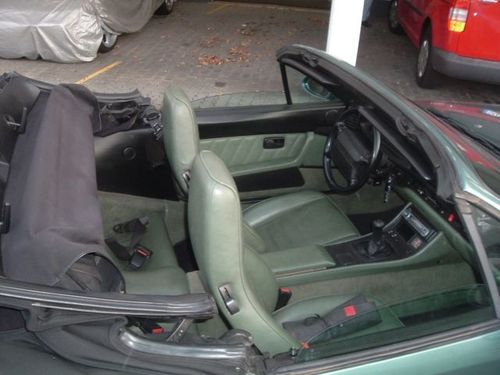 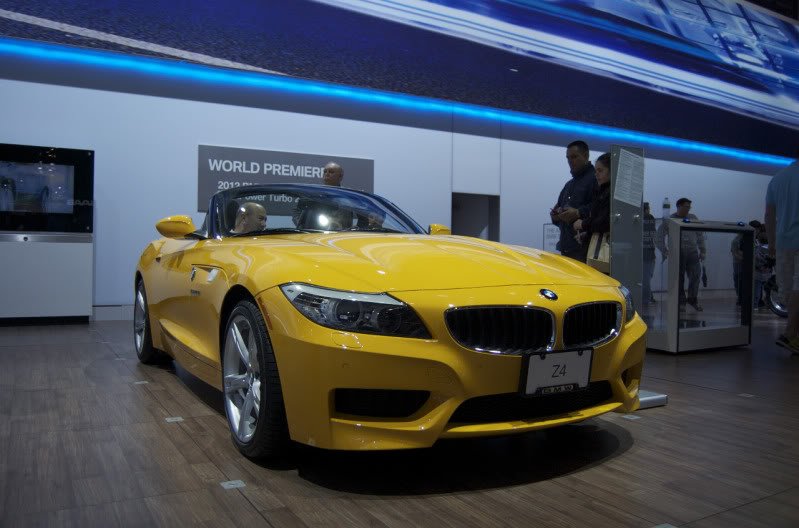 I saw it! What looked to be a newly designed 968!! As I got closer I went over the configuration… Front mounted […]