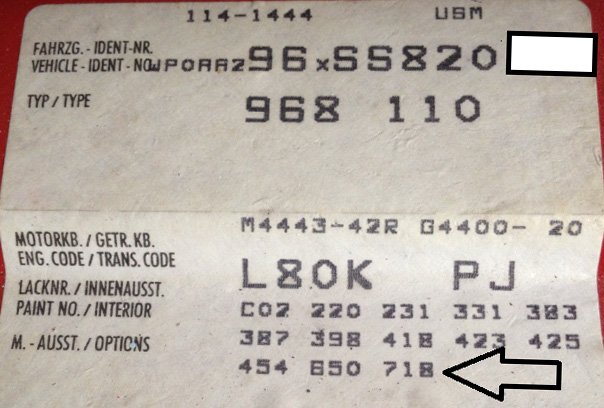 As we know, back in the early nineties when the 968s were being produced Porsche had very high hopes for them but it didn’t translate into sales. Because of this, production inventory backed up and Porsche came up with an innovative way to deal with it. They came up with option code 718 which allowed them to “reVIN” an “already produced” 968 into the upcoming model year so they could sell it as such.

So, how many times did they use option code 718?

If your 968 doesn’t have option code 718 then it was truly manufactured in its model year.

I have seen at least one case where an option code 718 968 was registered as the wrong year car because someone looked at the build date on the door jamb sticker to determine the car’s model year and not the specific letter in the VIN (10th position, N=92, P=93, R=94, S=95). It should also be noted that slow sales impacted the early nineties 911 and 928 series and option code 718 was utilized for the same reason with these model lines as well.

See the “model year differences” section of the site for a more thorough list of differences between 718 and non-718 cars in a given model year.