The 968 is an automobile sold by Porsche AG of Germany from 1992 to 1995 and marketed as the replacement for the Porsche 944. When production ceased in the 1995 model year, it represented the end of a line started almost 20 years earlier with the introduction of the Porsche 924.

The Porsche 968 represents the culmination of Porsche’s 944 legacy. The 944 S2 was discontinued after the 1991 model year. Before that time, Porsche had been working on a new model to replace the outgoing 944. At first, it was going to be the 944 S3, to replace the “S2” variant that Porsche had introduced in 1989. As time went on, they realized that the car had too much new stuff to not introduce as a totally new model.  Many of the 944’s components were modified or replaced entirely during development stages, hence the 968 nameplate. By late 1991, the 968 was ready. It retained all the good bits of its predecessor, while significantly improving appearance, handling, and performance.

Production was moved from the VW-Audi plant in Neckarsulm where the 924 and 944 had been manufactured under contract to Porsche, to Porsche’s own factory in Zuffenhausen. 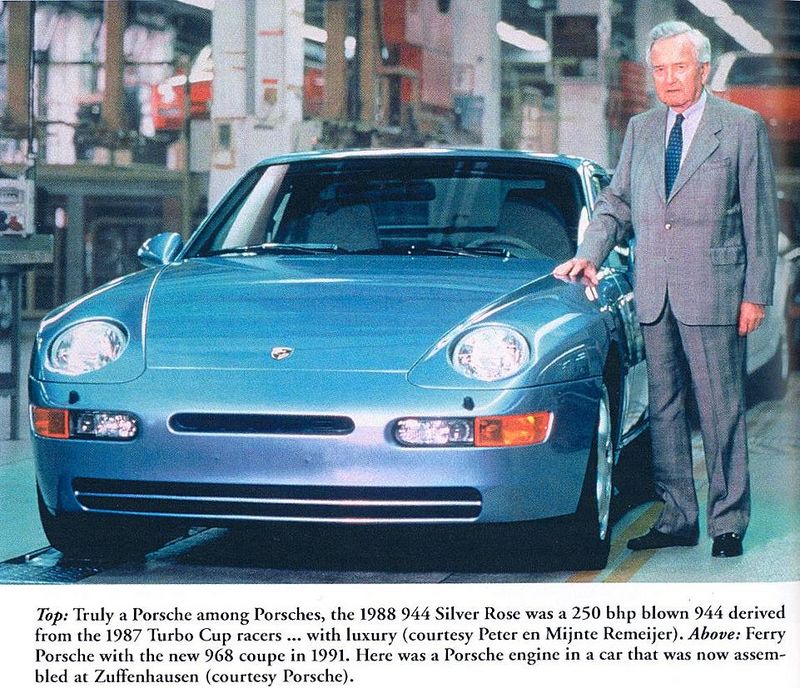 The new model was powered by an updated version of the 944’s straight-4 engine, now displacing 3.0 L and producing 240 PS (236 hp/177 kW). Changes to the 968’s power train also included the VarioCam variable valve timing system, newly-optimized induction and exhaust systems, a dual-mass flywheel, and updated engine management electronics. The 968’s engine was the second-largest 4-cylinder ever offered in a production car, and the most powerful naturally-aspirated 4-cylinder engine ever sold in a production automobile up to that time. A new 6-speed manual transmission was offered, as well as a dual-mode Tiptronic automatic.

The 968’s styling somewhat resembled the 928 although it looks considerably more like a blend of the Type 993 911, which did not appear until the end of the 968’s production, and a 944 S2. Like the 944, the 968 was sold as both a coupe and a convertible. Much of the 968’s chassis was carried over from the 944S2, which in itself shared many components with the 944 Turbo (internally numbered 951). Borrowed components include the Brembo-sourced 4-piston brake calipers on all four wheels, aluminum semi-trailing arms and aluminum front A-arms, used in a Macpherson strut arrangement. The steel unibody structure was also very similar to the previous models. Porsche, however, maintained that “fully 80% of the car is new”.

A street-legal race variant, dubbed Club Sport, appeared later on with a stripped-out interior including racing seats, revised suspension, and larger wheels and tyres, but was offered only in Europe. A UK-only version called 968 Sport, a Club Sport model with some comfort features added back in, was produced in 1994 and 1995. Porsche briefly produced a turbocharged version called Turbo S—15 were produced in total, and again the car was only sold in Europe. The 968 Turbo S was capable (in 1993) of 0–60 mph in 4.7 s and top speeds approaching 180 mph (290 km/h). A race variant called 968 Turbo RS was added as well; only 4 were produced.

The 968 was Porsche’s last new front-engined vehicle before the introduction of the Cayenne SUV in 2003. It was sold alongside the 928 GTS through 1995 when both models were dropped. As of 2013, Porsche has not yet built another two-door front-engined sports car.