These options were installed at the factory and can be confirmed by the car’s vehicle identification sticker (VIS). A 968’s VIS can be found in two locations: 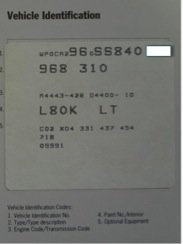 The options are listed in section 5 of the VIS (example above). Look closely at the codes as the font is sometimes difficult to read.

331 AM/FM cassette – standard on 968s but would be replaced with another radio upgrade code if applicable.

650 Sunroof – standard on NA 968 coupes. There are a couple of rare sunroof delete cars out there which would not have the code listed.

718 ReVIN to upcoming model year – see page elsewhere on this site for additional info on this code.

Some options were grouped together and offered as packages depending on the model year. Package codes are only referenced on sales documents and are not found on the VIS. Examples include:

If your 968 was equipped with an “X” code option then it is included in the exclusive build program which can be identified by the 5-digit code “09991” on the VIS. Being included in the Exclusive program is not that exclusive though as having a car with the common painted crest center caps (Option code XD4) was under the program and of the 4,242 North American 968s, 1,931 were equipped with the center cap option (46%).  The other X code options are quite rare and are primarily made up of wood and leather dress-up options. There were many exclusive options but only a limited number of NA 968s were factory equipped with them. Below you will find a chart listing the X code options that were actually utilized on NA 968s and the number of coupes and cabs that were factory equipped with them along with their cost. A few pictures of X code options are also included.

I do not have any factory documentation on these codes. The best way to figure these codes out is if you have the window sticker with the options listed. If you have one of these codes listed for your car let me know and we can see if we can figure out exactly what it represents.

Once the 968 was delivered to the dealer, the dealer would sometimes go to amazing lengths to sell a car. The greatest 968 example has to be when a dealer repainted a new black coupe in Wimbledon green at the dealership in order to sell it. You know how much paint there is on a 968 so the task of handling a color change is not a simple one. Still, the dealer performed it and from what I’m told, did a great job. Other examples of dealer “shenanigans” included robbing options out of one 968 to sell another. I recall a 968 cab that was on the floor at my local dealer and had its 17” cup2 wheels removed and this was reflected on the supplemental window sticker on the car. Another 968er had the sport seats robbed out of his coupe and the dealer used “white out” to remove the line items on the window sticker and then recalculate the final price. Many things went on at the dealership but unless you have the original paperwork, you would not know where a modification was made. That said, dealership changes are just that, and are considered “Day 2” modifications and not “factory” in any way.

Special factory handling of a 968 was also identified by specific option codes found on the VIS. Three varieties that I have identified include:

337 – Removal of transportation equipment – Only 1 NA 968 has this option code and that is the cabriolet that currently sits in the Porsche museum.

740 – Showcar preparation – This code would usually be found on a 968 that was designated for a major auto show or press utilization. I am not sure of exactly what the special handling would be for a car with option code 740. 10 coupes and 10 cabs were optioned as 740 cars. These cars usually have some special options as well.

900 – Tourist delivery – Still offered today, this allowed the buyer to pick up their 968 at the factory and enjoy it in Europe for a while, then returning it to Porsche for shipping back to the states. I am not sure of the cost or if there was a cost. 19 Coupes had this option. I do not have the figure for cabs.