This has been a busy 968 summer but not for the usual “show season” reasons but because Greg and I acquired another one. An amazing Wimbledon green cabriolet with 18,900 original miles. The story behind this 1 of 12 example is amazing and I’ll have it for you with the next issue. Even more amazing, for a few weeks I have had 4.5 968s at my house!!! Can you believe my wife allowed this? 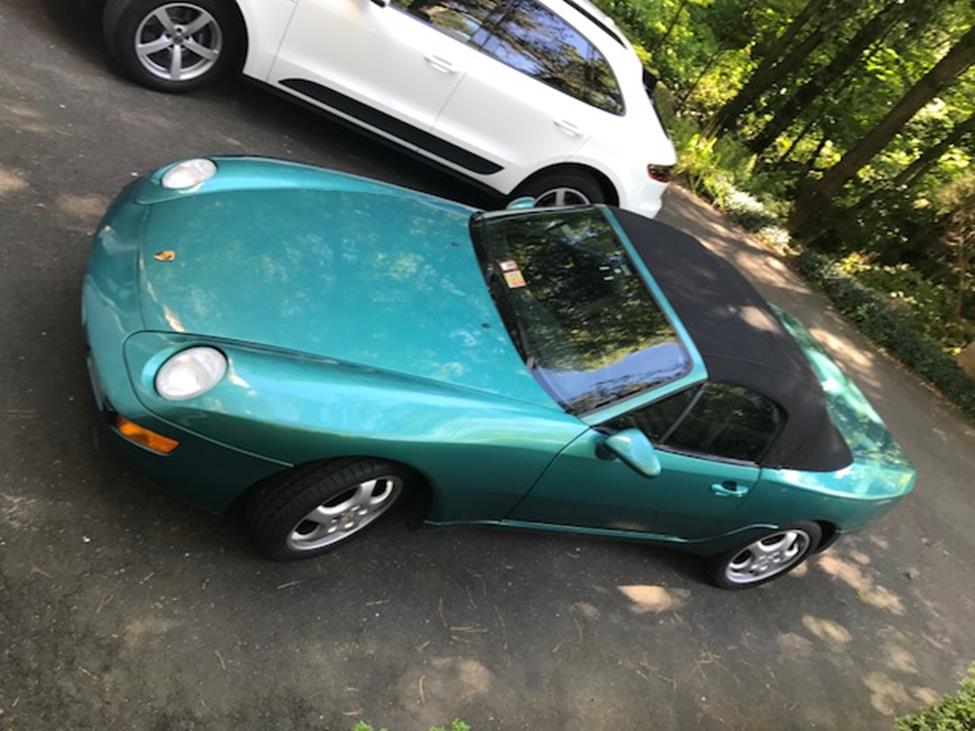 Recently I had an interesting discussion with my good friend Art, a fellow auto enthusiast. We have been swapping car stories for years and I happened to mention to him about the slow Porsche sales in the early nineties and the company’s use of option code 718 to reVIN the leftover 968s to the upcoming model year. He responded to me by asking if I knew that there was another model of car that he knew of that had the same predicament and the company responded in the exact same way. Really? Yes, and it was Ford! He went on to tell me that Ford, who was now producing the Shelby Mustangs, was stuck with an inventory of unsold 1969s. So what did they do? They reVINed them to 1970 model year and sold them as the new 1970 model just like our 718 code 968s. Wow, I did not know that. And this is particularly noticeable on these Shelby’s because Ford had made a number of great advancements in the area of powertrains for 1970 but obviously, these leftover 69s, now masquerading as 70s, did not enjoy any of those great changes.

But after a little investigation on exactly what Ford did one comes to find out that it was not quite as bad as the Porsche program. For a 718-code Porsche 968 the car is absolutely identical to the previous model year with the exception of the new VIN. There is not one difference between a 1993 968 and a 718-code 1994 968 because they both initially started as 1993s. Although Ford performed the same reVIN process on the Shelby’s they did at least make two very small efforts on their “new” 1970s to differentiate them from the 1969 models that they started as. They added two black stripes on the hood and a chin spoiler. So you can actually “see the difference” between a 69 and a 70 Shelby Mustang, Not so with the 968. Interesting stuff. 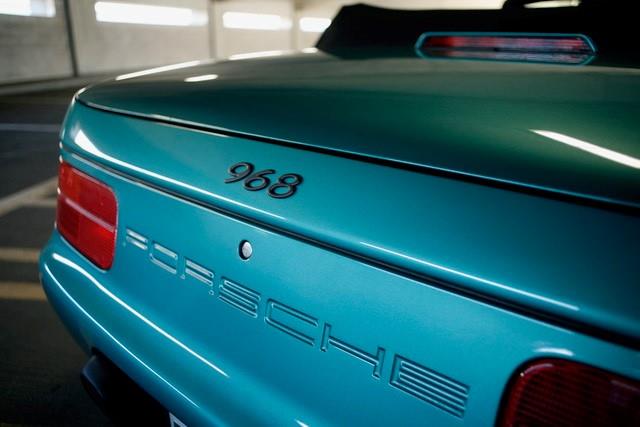 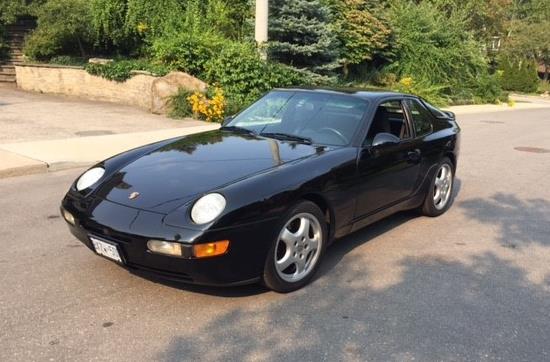 During any vehicle’s production run there are always a few significant examples produced. Some of these would include cars with special options or with the most options. With Porsches, performance related examples often get the “significant nod” here. The rare colors are also neat and stand out among the group in later years. But two common examples of significance found in every model line would be the first car and the last car produced. These cars are often significant beyond their super low or high VINs as they usually have some interesting options and history as well.

When it comes to the first 968s produced for the North American market we were denied! The first six North American 968 coupes and the first two 968 cabs produced never made it across the pond and were retained in Germany. No surprise really. Porsche was probably having fun with the new models and using them for promotional duties. But things had changed significantly by the time 968 production came to an end for the model year 1995 and Porsche was looking to finish the model off so they could move on to the promising new Boxster line.

You may recall from one of my previous articles that Porsche actually reVINed all the 1995 968 cabriolets from 1994 models so the last cab was actually produced in June of 1994. Most of the 1995 coupes were also reVINed 94s but for some reason Porsche did produce 60 additional “true 95” coupes between July and October of 1994 and SS820319 was the last one made.

Now, over time I have seen more than one 968 with a “LAST968” license plate mounted on it but in reality, it was just a model year 1995 example, not the true last car who can rightfully lay claim to that title. There was also a very cool “paint to sample” 968 coupe out there which also claimed to be the “Last One”. That car was produced during the last month of production, October of 1994, but a review of the VIN saw that it was SS820318, the “second to the last” example. To be fair, SS820318 has US

emissions where 319 was shipped to Canada so although both are North American 968s, SS820318 can claim the title of “the last US emissions car”. But, without a doubt, SS820319 has the highest VIN and is the only 968 that can truly claim the title of “last North American 968” and just a couple of weeks ago I was contacted by the owner of that car who was, of course, located in Canada.

So, what does the true “Last 968” look like? Well, it is a looker for sure being all black, in and out (the most popular color combo on the 968 coupe) and it is optioned right. As mentioned previously, the car is a Canadian car so it came with the Canadian package as standard equipment. That package includes Canadian emissions, dual heated seats, and headlight washers. Additional add-ons included 17” cup2 wheels (which have been replaced by cup1s, Rob is on the hunt for a correct set of Cup2s) and that always valuable, factory analog phone. 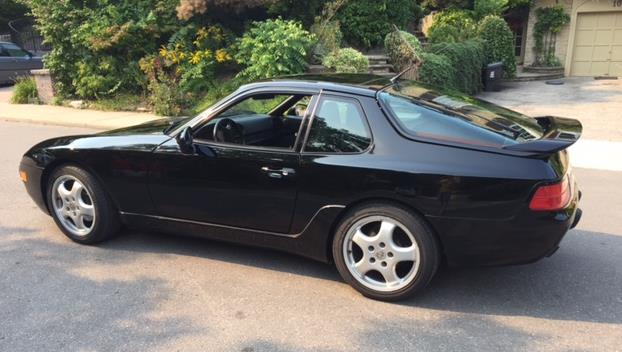 I asked the owner Rob about the history of the car and he indicated that he has owned the car for 2 years. He was attracted to the 968 by the looks and rarity of the model but his father is a true Porsche fan having owned a number of models so there is clearly a family influence working here as well. The car was sold new at Downtown Porsche in Toronto and has spent its entire life in southern Ontario. Rob was surprised to learn about the special significance of his car but now that he knows, he will be sure to take extra special care of it. I was happy to find out that this significant 968 was still alive and well.

I have a lot of production data on our 968s but I don’t have it all. One category that I don’t have all the info on is the rare 5 digit interior code options. These were custom interior options such as deviated carpet and piping on the seats. One of those option codes that I have only seen 3 times on North American 968s is option code 16821. The code references the optional Porsche crest on the front bucket seat back. This reasonably priced option was only $103 back when the 968s were new and offered an inlay into the seat upholstery reflecting the smart looking Porsche crest. I recently came across a white coupe that was for sale and was equipped with this rare option. This car also had the $2256 full leather seats so combined with the Porsche crest they were pretty nice seats. The owner sent me some photos which you can see below. I think you’ll agree that they are pretty sharp. 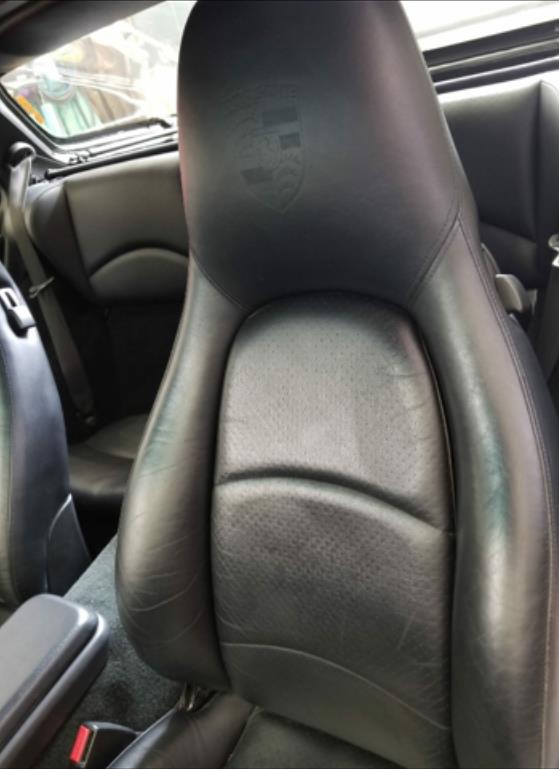 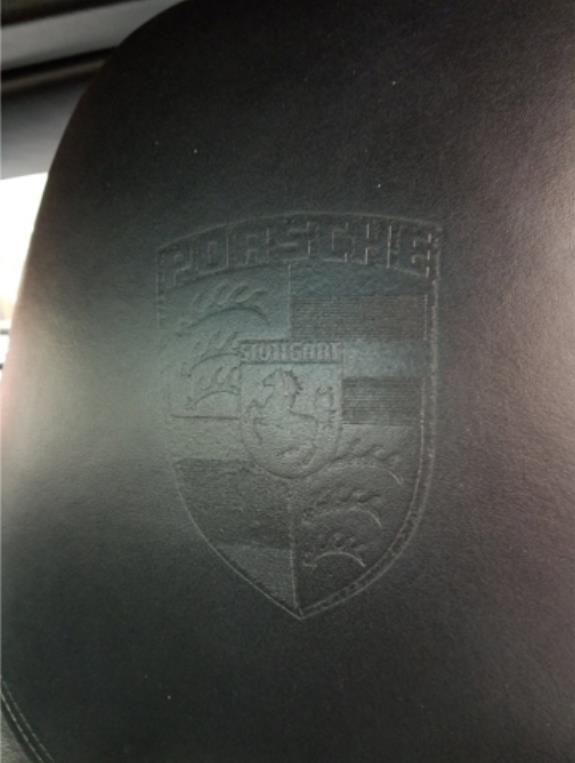 In the past I have shared with you production run changes that I have found on our 968s (recessed hood badge, larger edged rear emblem). While working on the Matador I continue to run across additional production changes, again, all in the 1992 model year. The Matador is a 1992 968 and was produced in June of 1992, at the end of the model year. Minty is #9 and was produced in September of 1991. I’m not sure why these changes were made.

Sun visor mirrors – So this is a very early change. As in, only the first few 968s do not have sun visor mirrors. Minty does not have them. The Matador does. The non-mirror visors appear to be a carryover from the European 944s? 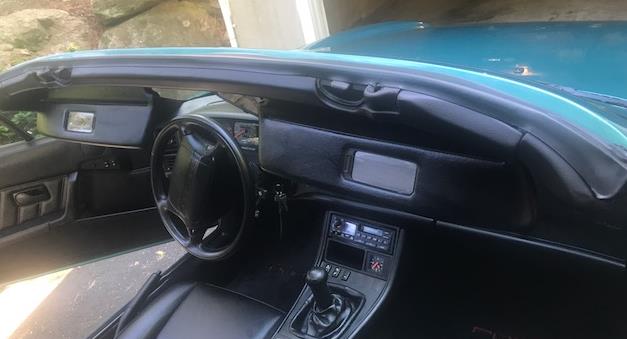 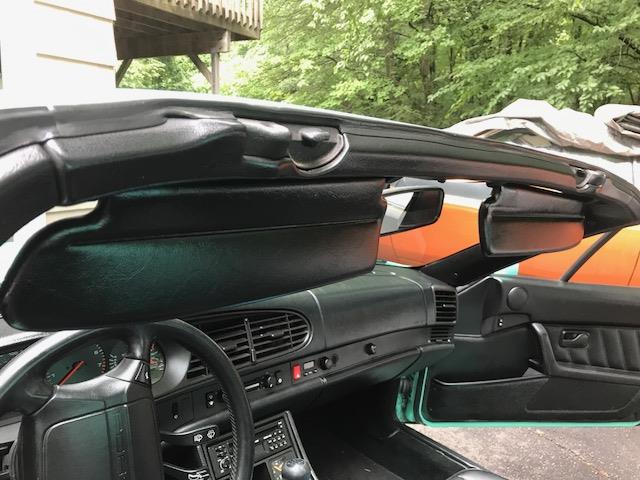 Body VIN number – Minty has a German ROW VIN as the body number. The Matador has a North American VIN that matches everything else on the car. You’ll even note that the method of applying the VIN is different (Stamped vs Laser). This change appears to have happened sometime in January of 1992. 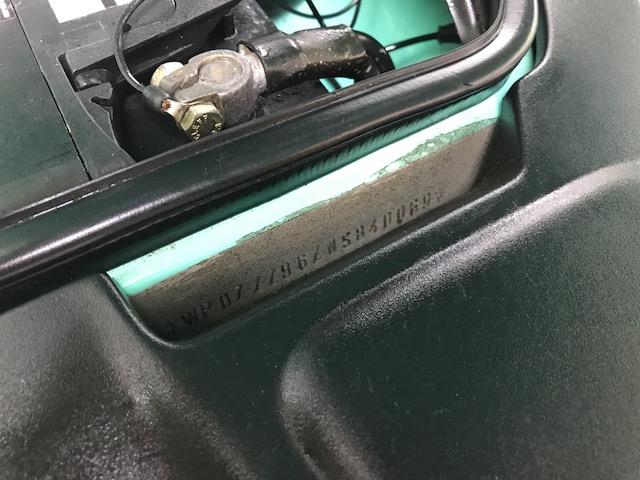 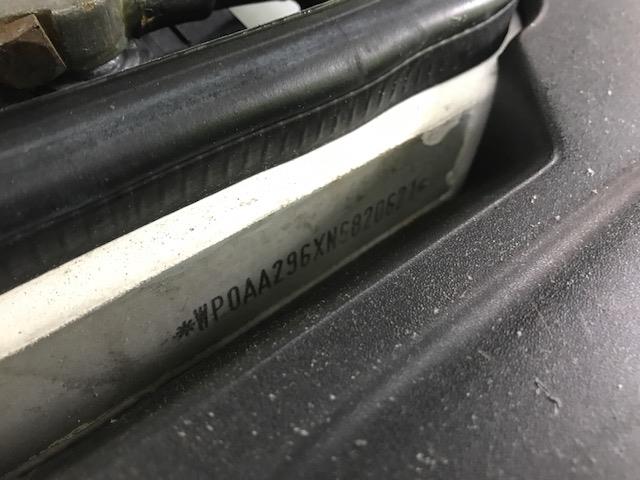 Engine compartment glove box – We have three versions of this application for our 968s. When 968s began production they had a thoughtful glove box unit in the engine compartment that contained cloth gloves and a rag in special zip-lock bags. The piece looked great and, combined with the rear cover piece, cleaned up the 968 engine compartment so it looked even better. The first minor change appears to have happened around May of the 1992 model year with the removal of the raised gloves from the glove box door. The September 1991 produced Minty has the gloves shown on the door of the glove box. The June 1992 produced Matador does not. So you’ll find the gloved door from 9/91 – 5/92 and the no-gloved door from 6/92 – 6/93. When the mid-year 94 changes appeared on the 968 in July of 1993 the engine trim pieces had been removed and continued that way until the end of production. 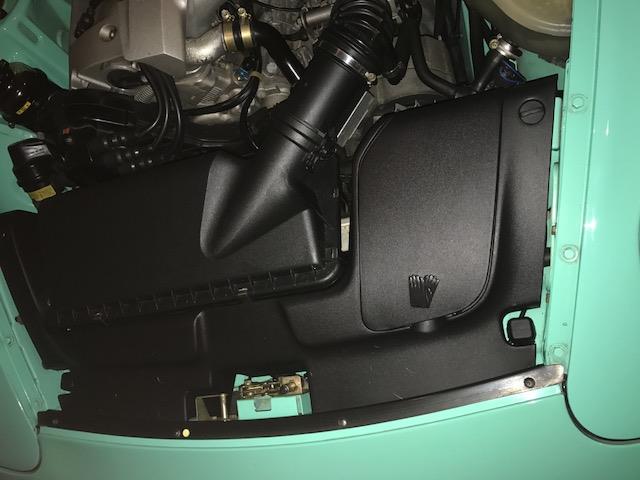 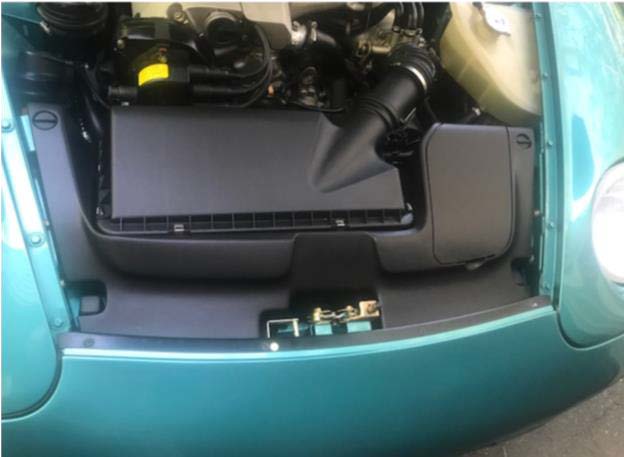 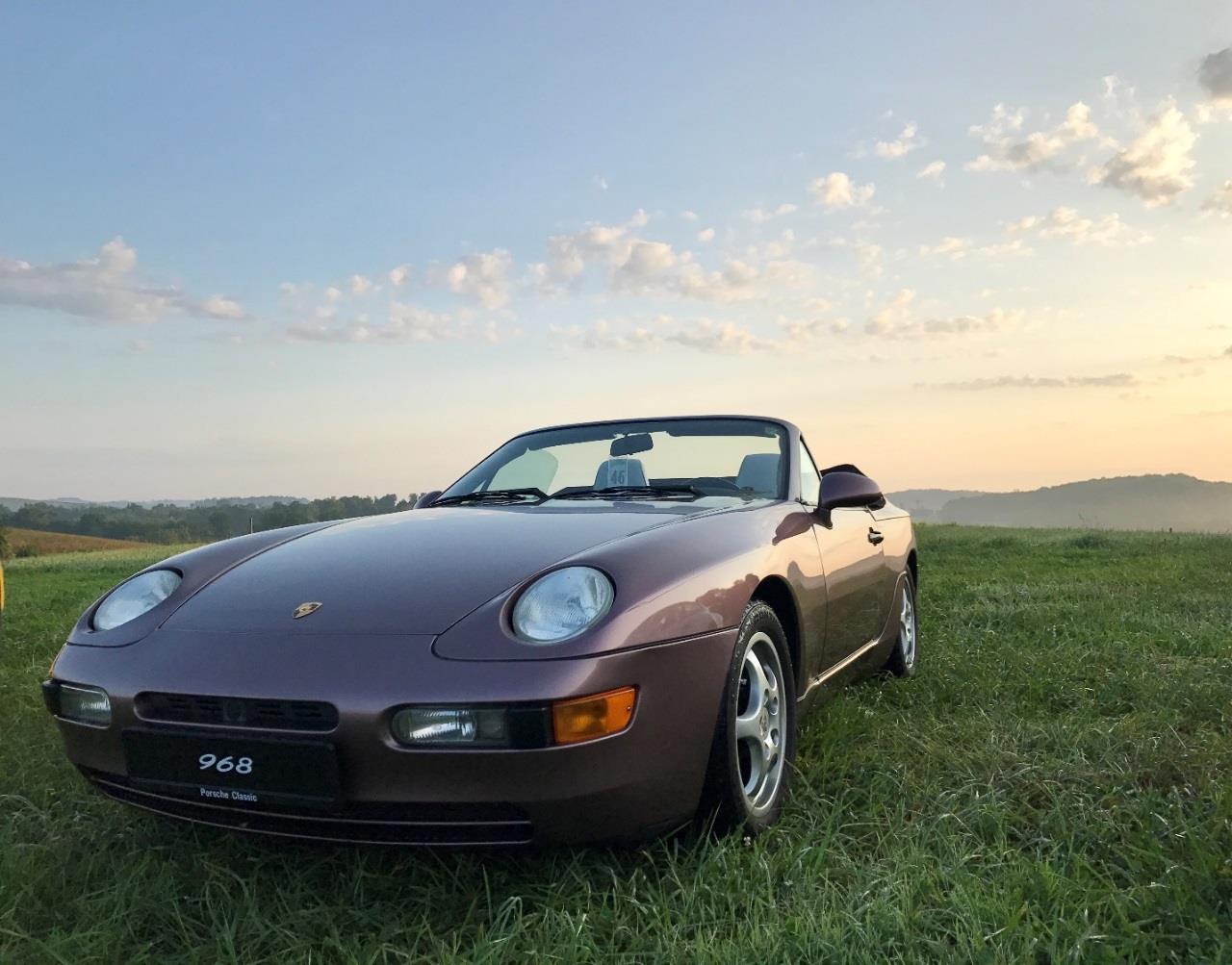 There are quite a few 968’s in the Metroplex but only a few have registered with the Maverick Region of PCA. 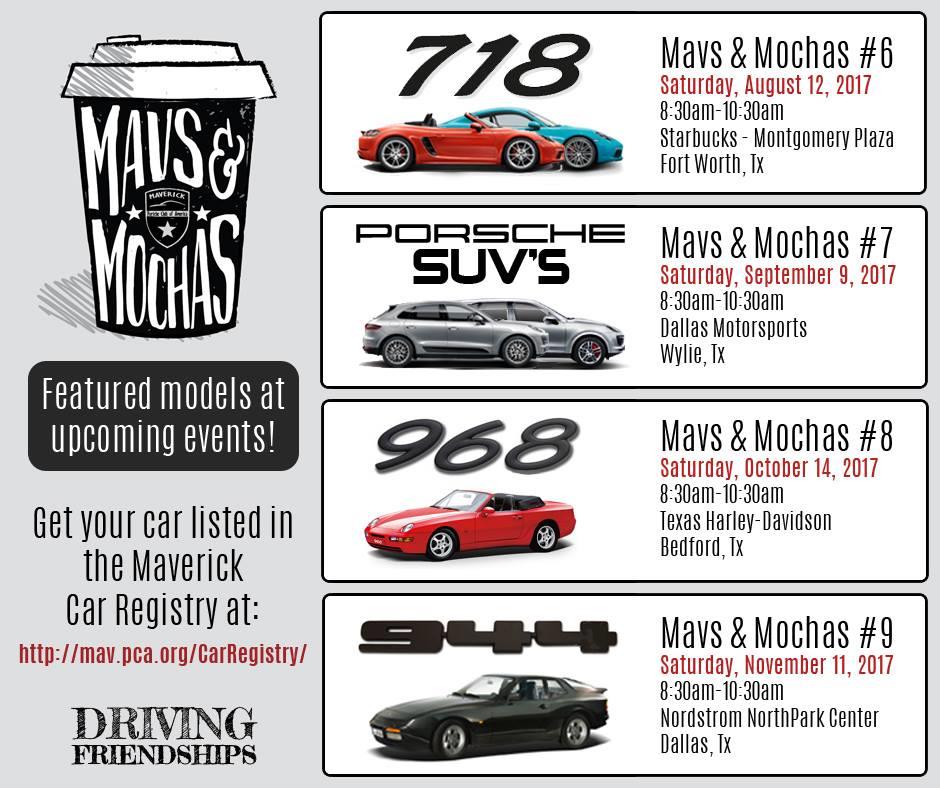 For more details and to let him know you are coming, contact Rob at robadams@sbcglobal.net

2017 West Coast Gathering – Thanks to Bob Frith and Kaj Hallstrom for organizing this fun, annual event. Their review appears below: 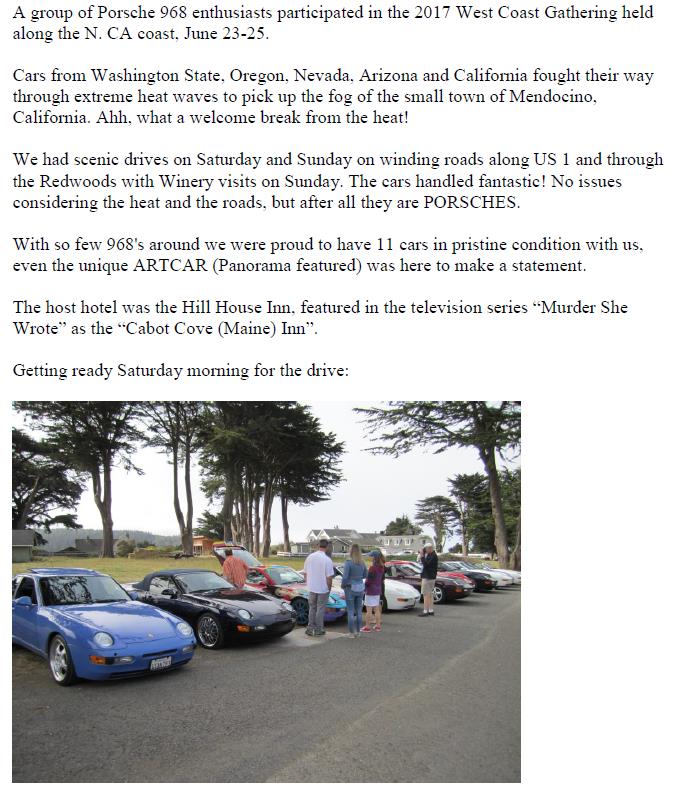 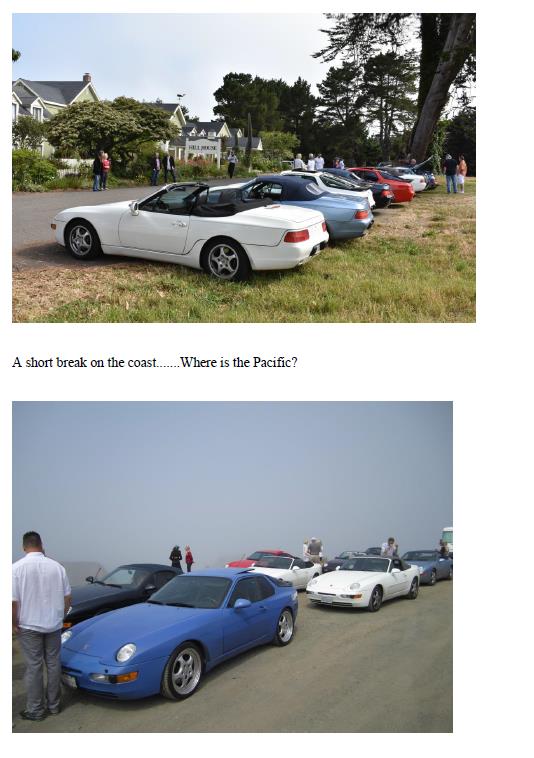 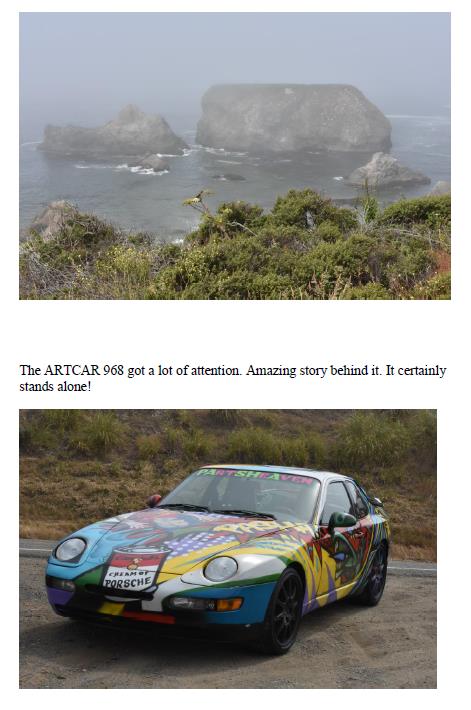 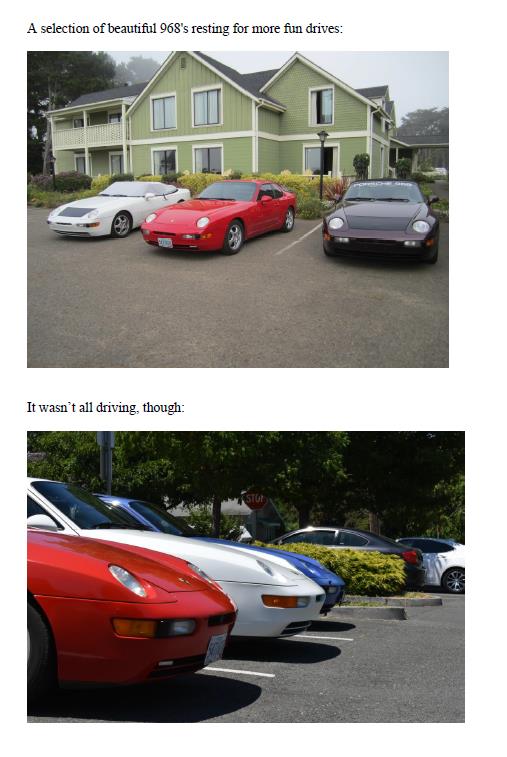 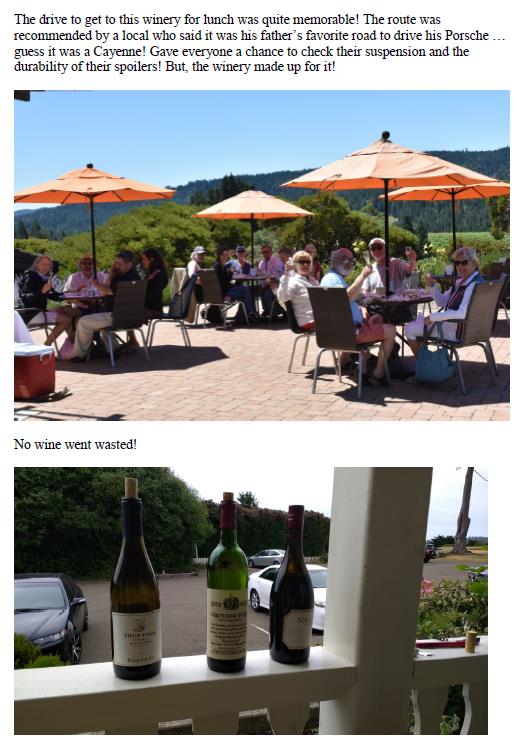 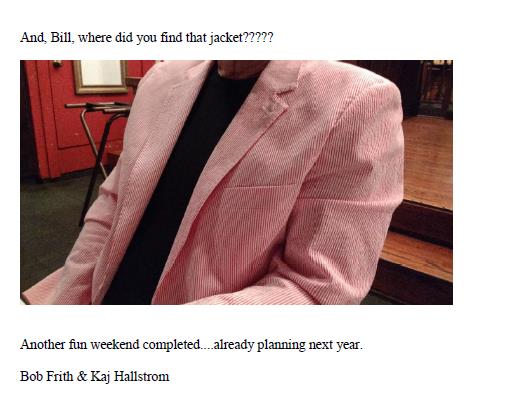